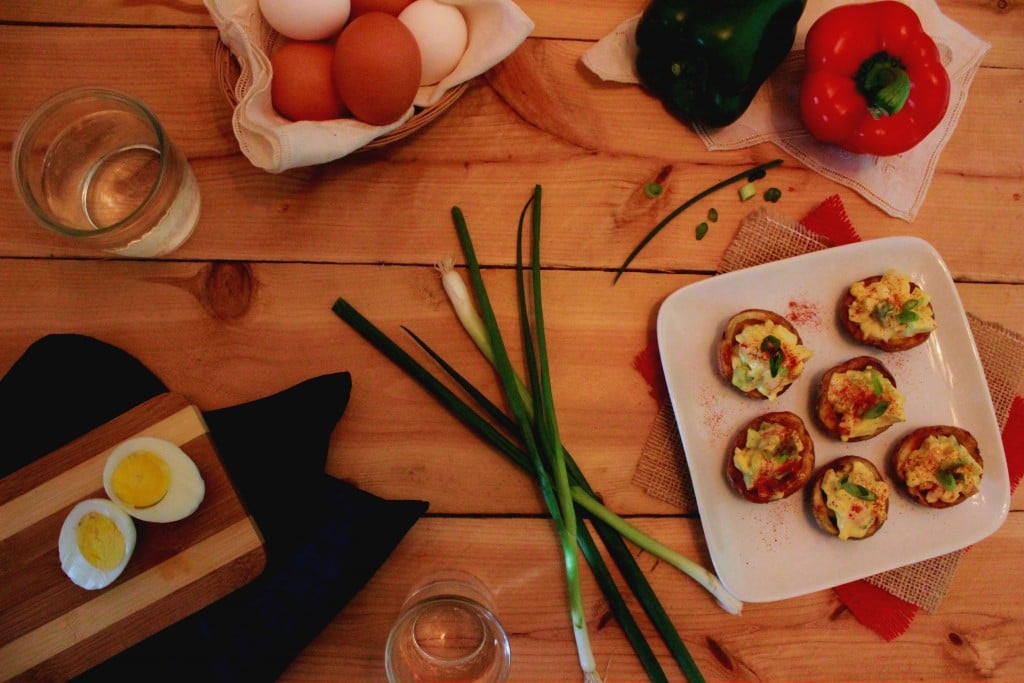 I love entertaining and I love little bite sized appetizers.  Although potato salad might not be considered an elegant food to eat, it becomes a little more elegant when you serve it in a little potato cup!  My husband and I bought our very first house when we moved to Tucson and since then I have been fantasizing about throwing a house warming party where everyone just brings cute little appetizers to eat.  I might want to get on that soon though, because we have been living in our new house for about six months now!  Is it still considered a house warming party when the house is already well warmed after living in it for half a year?!
Every single time I sit down to write up a recipe, I struggle with the same problem: I want to tell you exactly how I made my recipe, but at the same time I want to tell you to use whatever ingredients you want to make it your own.  If you don’t like one of the ingredients I used, leave it out, or if you really love one of them, add more.  I like the idea of putting the recipe out there and allowing readers to alter it in ways that will make it really delicious to them, because that is what I find myself doing when I read other people’s recipes.  I feel like that philosophy especially rings true with this recipe.  The idea of this recipe is to make potato salad, but leave out the potatoes, and instead stuff the filling into a little potato cup.  I used, and have included, the potato salad recipe that I like to use, but if you have a solid go-to potato salad recipe that you use, by all means use it!  On the other hand, if you have never made potato salad before, or are looking for a way to shake up your own recipe, try mine!  However you decide to make this, I hope you enjoy it! 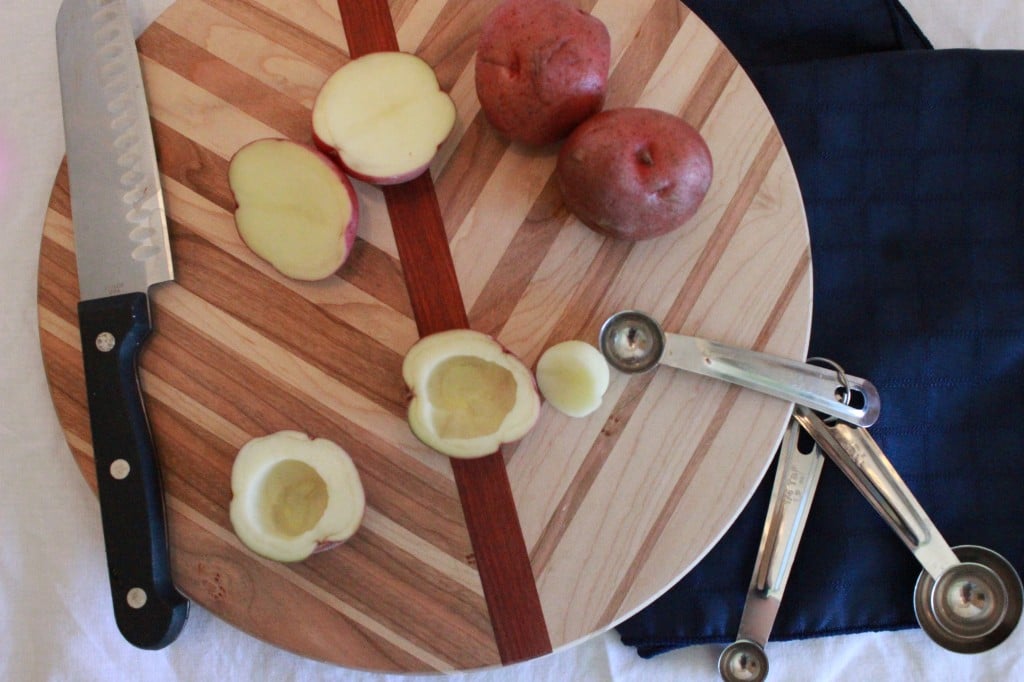 My metal measuring spoon worked great to scoop the inside of the potato out, and like I said above, if you don’t want to waste the little ball of potato that you scoop out, just throw it on a sheet pan with some olive oil, salt, and pepper and roast at 400 degrees for about 15 minutes.  They were so good, I think I need to make them again! 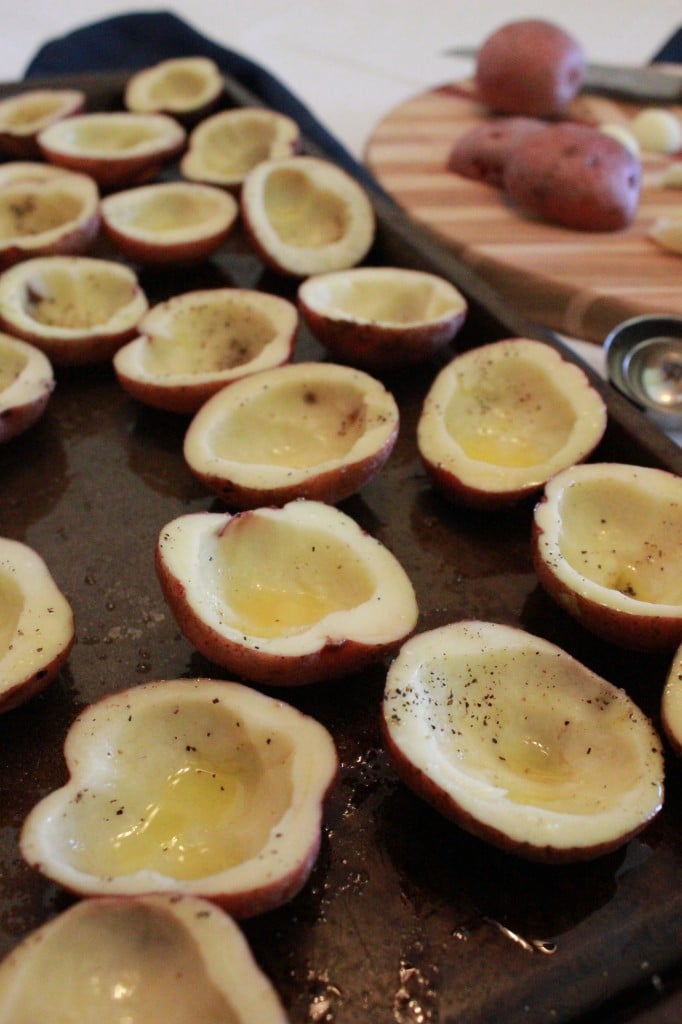 Drizzle with olive oil and season with salt and pepper. 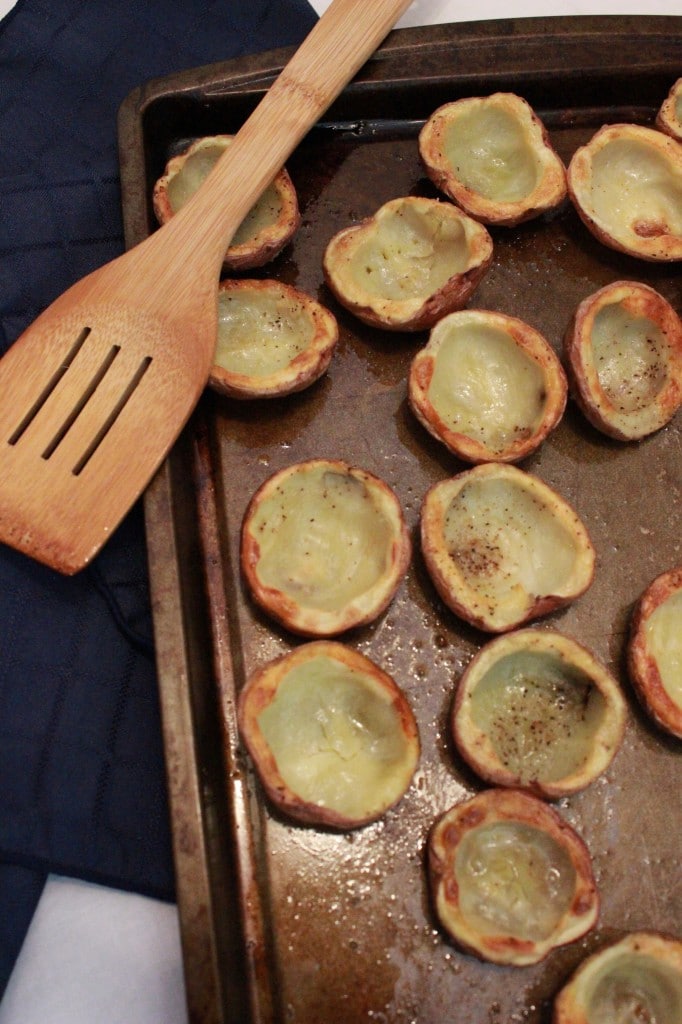 Bake the potato cups until they are fork tender and just turning brown on the tops.  I could eat them just like this!  Making these has got me thinking about what else I can stuff inside of a potato, any suggestions??  I mean, what doesn’t go well with potatoes?!
I’m embarrassed to admit that it took me until a few years ago to be able to cook a hard-boiled egg that didn’t have a big dark circle around the yolk.  I think it goes back to the first time I ever attempted to make a hard-boiled egg without adult supervision.  It was just before Easter and my friend, Shoshona, was over, we were dying eggs for the amazing Easter egg hunt that her mom would set up for us and neither of us had ever made hard-boiled eggs before.  I don’t remember exactly how long we boiled them for, but it definitely wasn’t long enough!  We cracked one open and it was pretty much raw yolk with a little bit of hardened egg white around it.  Ever since then I have always boiled my eggs way too long, sometimes I left them on the heat for about 15 minutes after the water had come up to a boil!  A few years ago I decided that making a nice looking hard-boiled egg could be a good skill to have, so I looked it up on the internet and have been making them this way ever since! 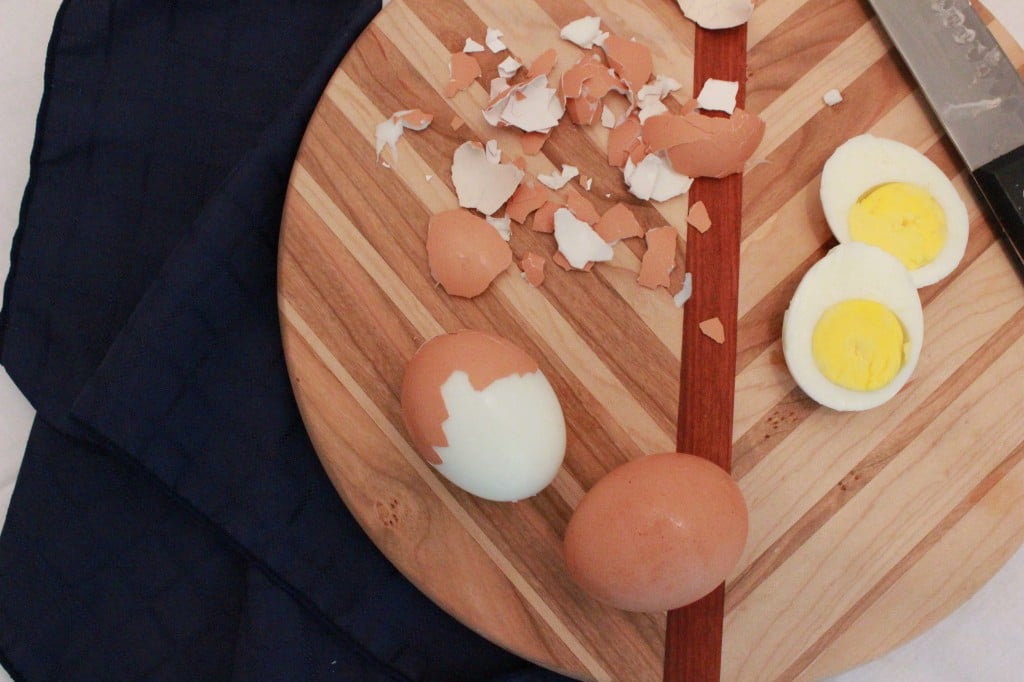 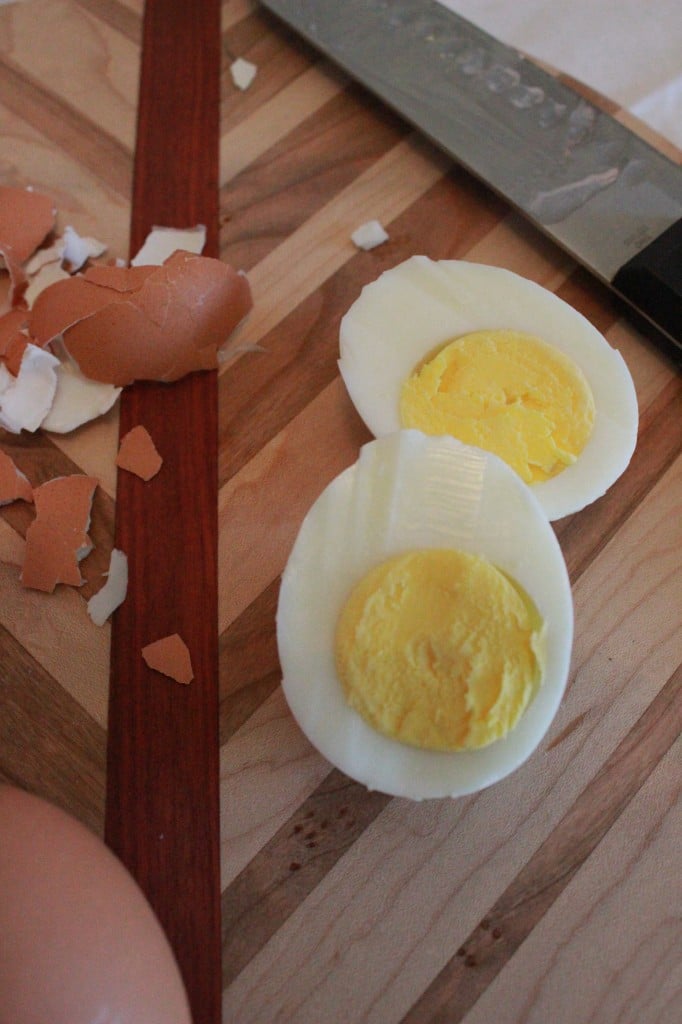 Dice up the eggs into a small enough dice that the pieces will not be too big to fit into the potato cups.  Then mix all the ingredients together, basically like you are making egg salad. 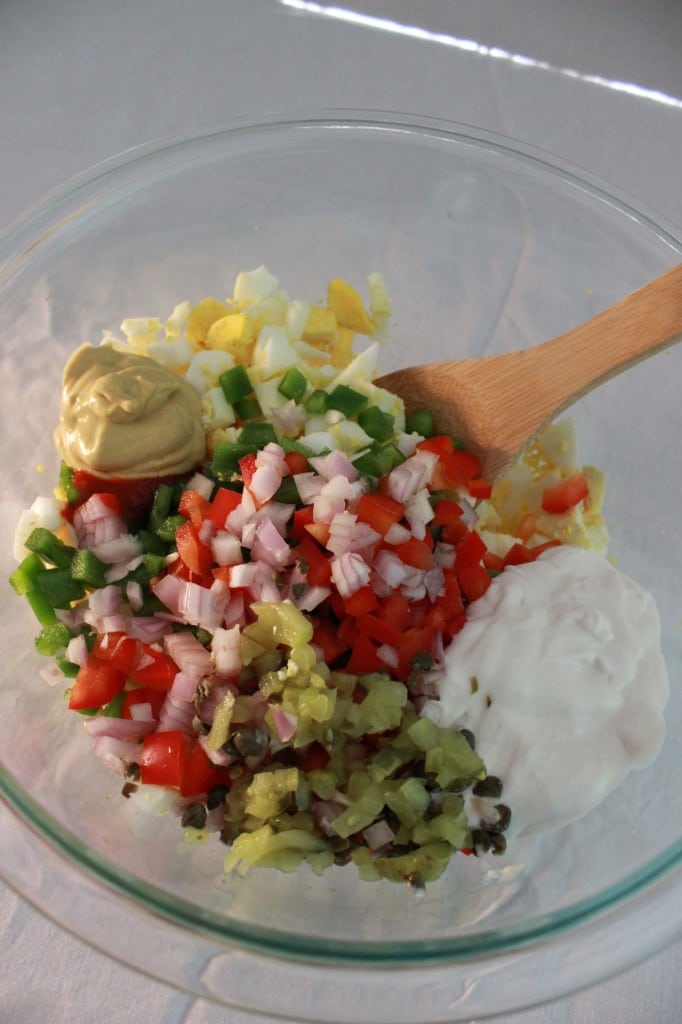 I tried to get a little fancy here and add capers to the salad instead of dill pickles, but after I sliced up all the capers and threw them in I decided that I’m not a big fan of capers.  If you are a caper fan and looking for ways to use up that jar you have in your refrigerator, this would be the perfect place. 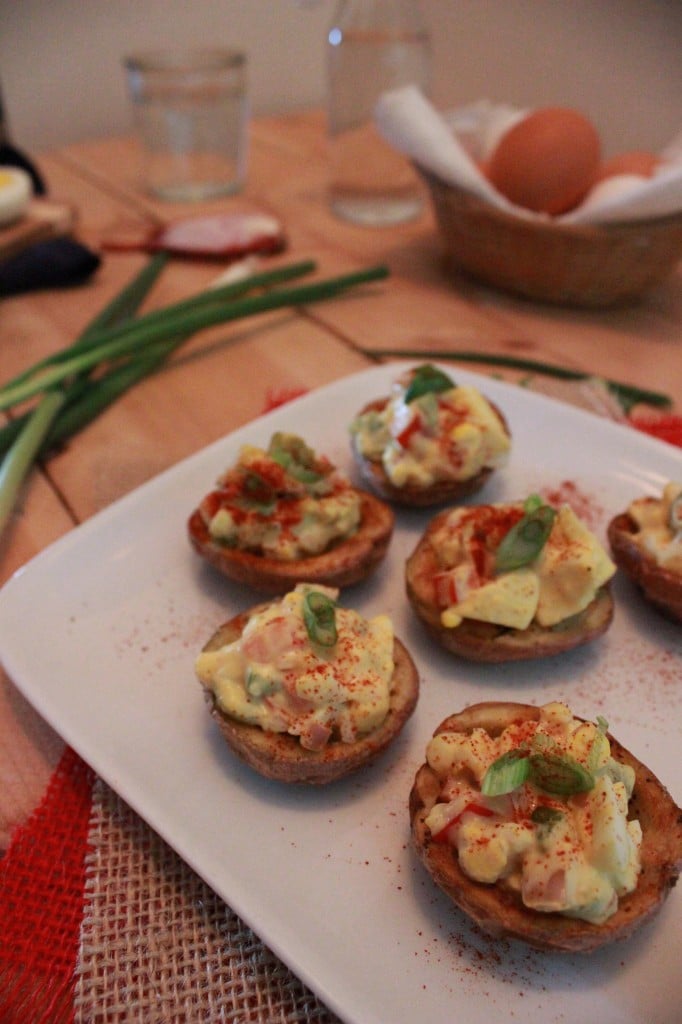 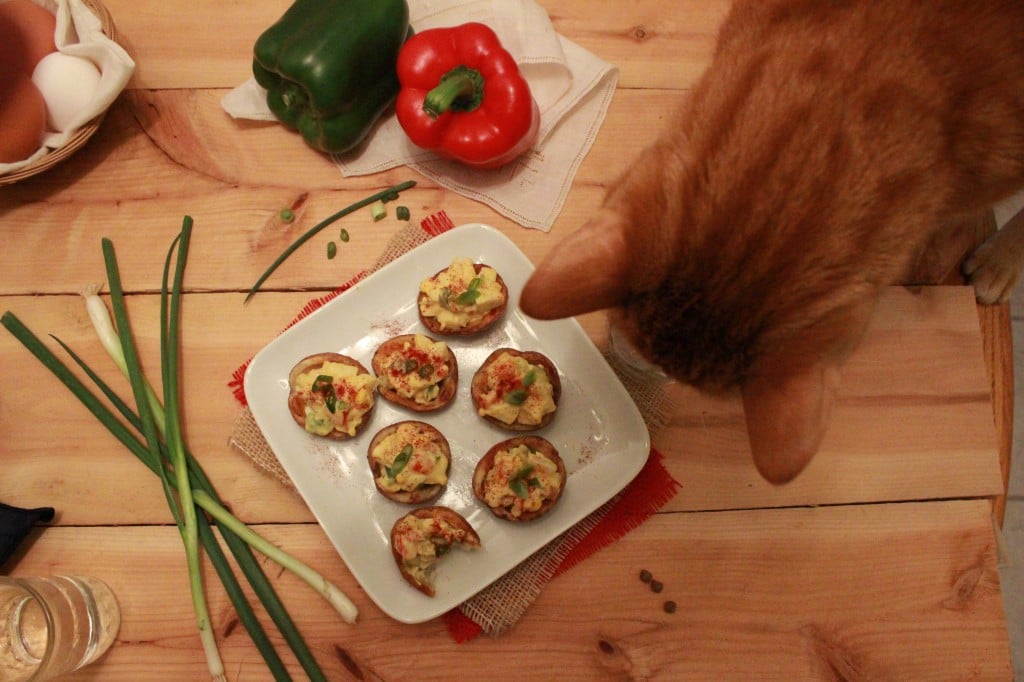 Cheeto might be more interested in the cup of water than the potato salad bits!
« Turkey Bacon, Avocado, BLT
Cheese and Sausage Stuffed Peppers »