If you’ve come here in search of a recipe for a bun in the oven, I’m sorry but I don’t have that for you today.  Well, I could give you the recipe for how this bun was made, but I’m not sure that is appropriate for a food blog, haha!  If you haven’t guessed already, I’m pregnant!  That’s not just a food baby in there this time 🙂

Baby Lassance is due in early July and we couldn’t be happier or more excited!  That being said, the last 2 1/2 months have been really hard.  After I found out I was pregnant I had about 2-3 weeks of being excited and feeling great.  I remember telling someone that I hadn’t felt nauseous at all and part of me was a little worried I wasn’t going to feel nauseous (my acupuncturist told me that feeling sick meant a healthy baby, I’m pretty sure that is an old wives tale though!)  Then, about 2 weeks later the nausea hit like a ton of bricks.  I remember laying on the couch feeling terrible and thinking to myself that this feeling couldn’t possibly last until week 12.  And, it turns out that it didn’t last until week 12, it lasted until about week 16, ha!  I’ve finally started to feel much better over the past week, but I still don’t feel 100% back to my old self.

Throwing up a few times a day when looking at or smelling certain foods has not been very conducive to running a food blog!  I’ve basically been living off of rice cakes, yogurt and bananas lately and I don’t think that anyone is interested in any recipes I could make with those 3 things!  So, if I’ve been a little MIA from this blog as well as visiting other blogs I love, that would be why!  But, this week, I’m finally starting to feel less nauseous and I have enough energy to get off the couch, so I hope to get back into the swing of things soon!

I didn’t want to make this post too long, but I did want to share a little bit about our pregnancy journey, if you will.  Mainly because when you are trying to get pregnant it seems like everyone around you is getting pregnant and most of them on the first try.  Don’t get me wrong, I’m so happy for all my pregnant and new mom friends!  It just feels a bit discouraging when it’s not so easy for you.

We started trying to get pregnant in mid May and part of me thought that maybe we would be lucky and it would happen on the first try since it seemed like I knew a few people who that did happen for, although I know other people say that that is really rare.  Well, it didn’t end up happening on the first try, or the second, third, fourth, or fifth try.  I know that it takes some people way longer than 6 months to get pregnant and some struggle much more than we did, but to me it felt like an eternity.

I had pretty much decided that something was wrong with either me or my husband and I was getting really discouraged and depressed about it.  I’m pretty sure my husband was secretly relieved each month when it didn’t happen, haha, so he was a good source of calming and reassurance that it would happen soon.  Although we were still trying, I was sure that it wasn’t going to ever happen (I guess I’m a bit dramatic sometimes, haha).  It was the 6th month of trying and I was so sick of seeing those negative tests.  I told myself that I wasn’t ever going to take another test until I had been late for at least a few days.

But, it just happened to be a Saturday about 4 or 5 days before my period was due and I really wanted to have a glass of wine that night.  I told myself that I was only taking the test so I could enjoy my wine, guilt free.  I woke up early, took the test and immediately wanted to throw it away because I really couldn’t bare to see another negative test.  I decided to look anyway and I saw a really faint line.  I had never seen a line before but it was so faint I wasn’t sure it could be real.  I ran out to the store and bought one of the digital tests hoping that it would give me a real answer.  They say that you should use the first urine of the day so I was a little unsure if I should take it or wait until the next morning.  I couldn’t wait though and I really wanted that wine so I took it anyway and sure enough, in big letters, it said: Pregnant!

I didn’t end up having the wine and now here we are 12 weeks later and we’re expecting a baby in about 5 1/2 months! 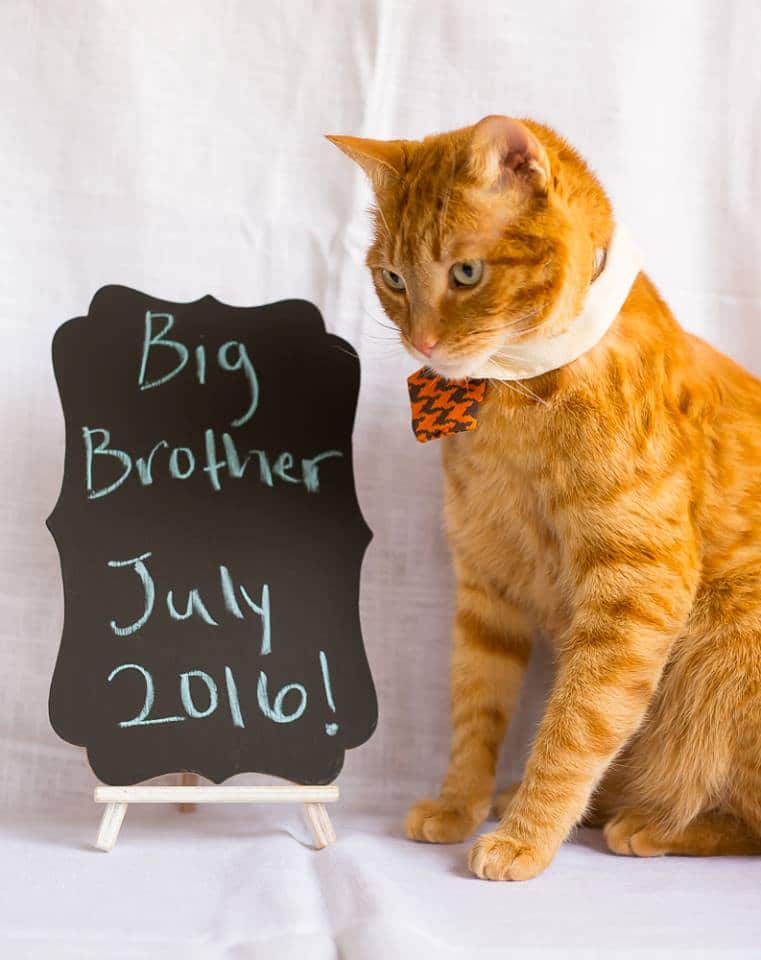 If you’re still reading this, thank you!  I’ll be back on Thursday with a recipe!