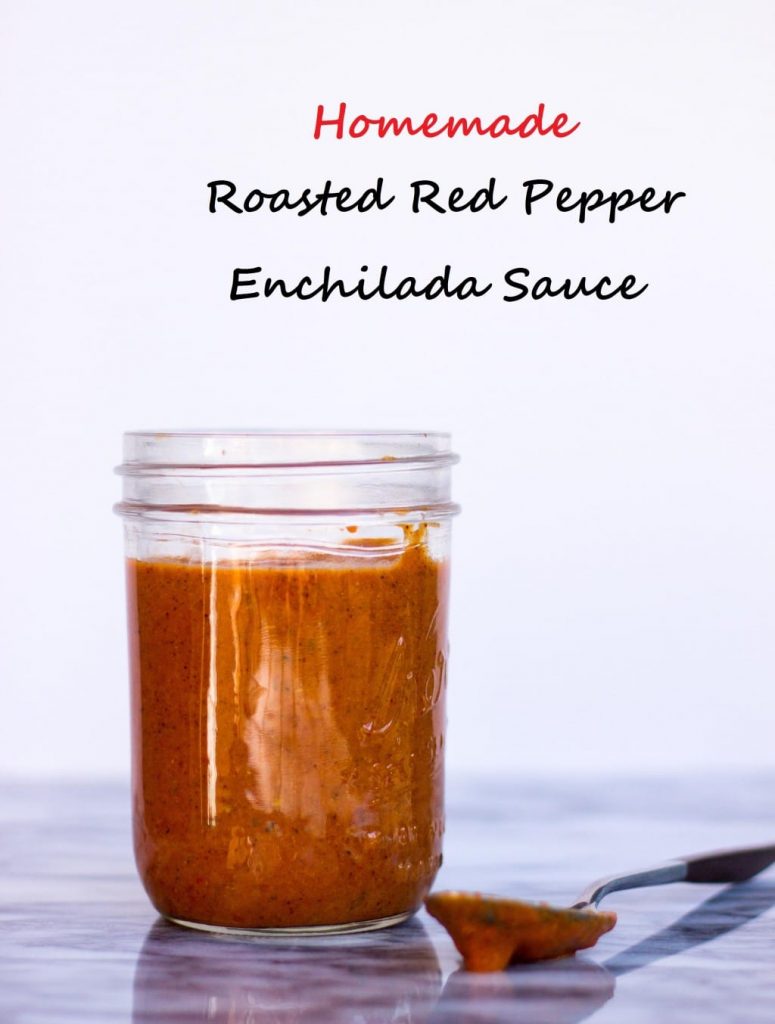 When I posted my Spaghetti Squash Enchilada recipe, I had someone ask me (hi Savanah!) if I had a good recipe for enchilada sauce.  To be completely honest with you, before that I had never even thought about making my own.  Enchilada sauce was just something that I bought in a can, from the store, when it was time to make enchiladas.

Most canned enchilada sauces that I tried were OK tasting, but they usually lacked a lot of flavor.  But, I figured I would just add in extra flavoring to the enchilada filling to make up for the lackluster canned enchilada sauce.  Ever since I was asked if I had a good enchilada sauce recipe I’ve been thinking about coming up with the perfect one.  I, honestly, didn’t even know where to begin, so I looked up a few homemade enchilada sauce recipes and that gave me an idea of the different flavors I wanted include in mine.  Most red enchilada sauces are tomato based, so I was planning on using tomatoes, but then the sale isle at the grocery store intervened.  If you have read my blog before, you might be realizing that I have a slight obsession with the grocery store.  I’ll try not to talk about it again 🙂 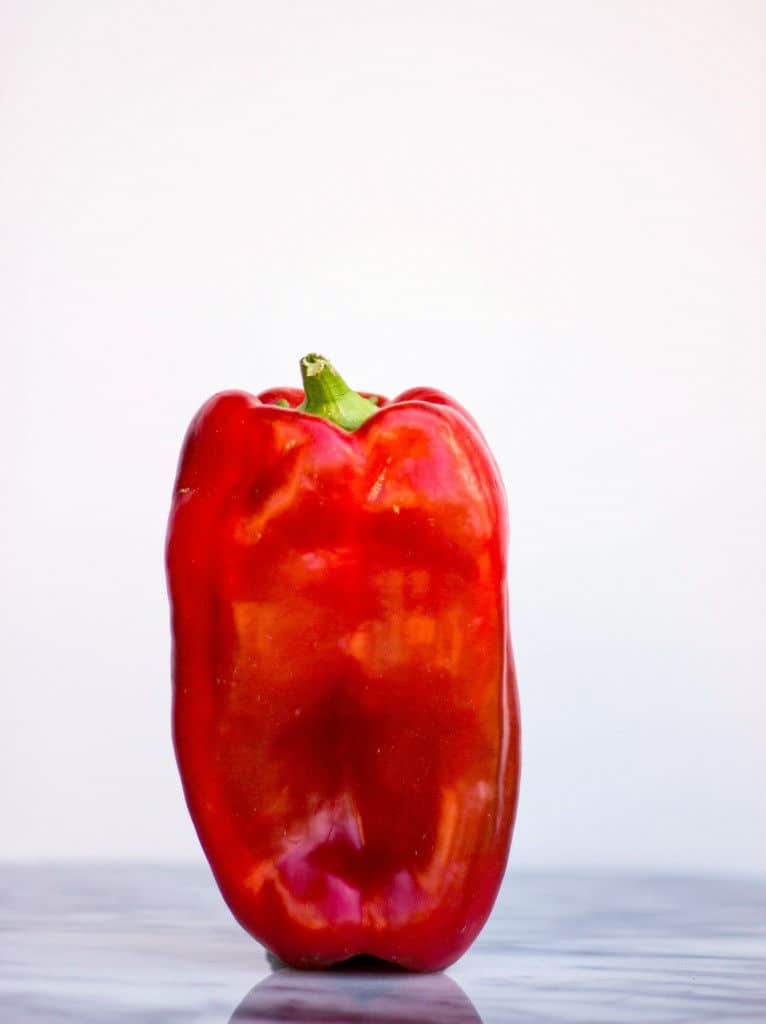 So, naturally I bought 9 of them.  I mean, who in their right mind would not stock up on cheap red peppers?!  Ok, maybe I’m the only crazy person that would buy 9 of them, but it all worked out perfectly.   When I originally spotted them, I had no plans to make an enchilada sauce out of them, but when I got home with my bounty of red peppers, I sat around for a while thinking of a tasty dish I could put them in.  Then it came to me, roasted red pepper enchilada sauce! 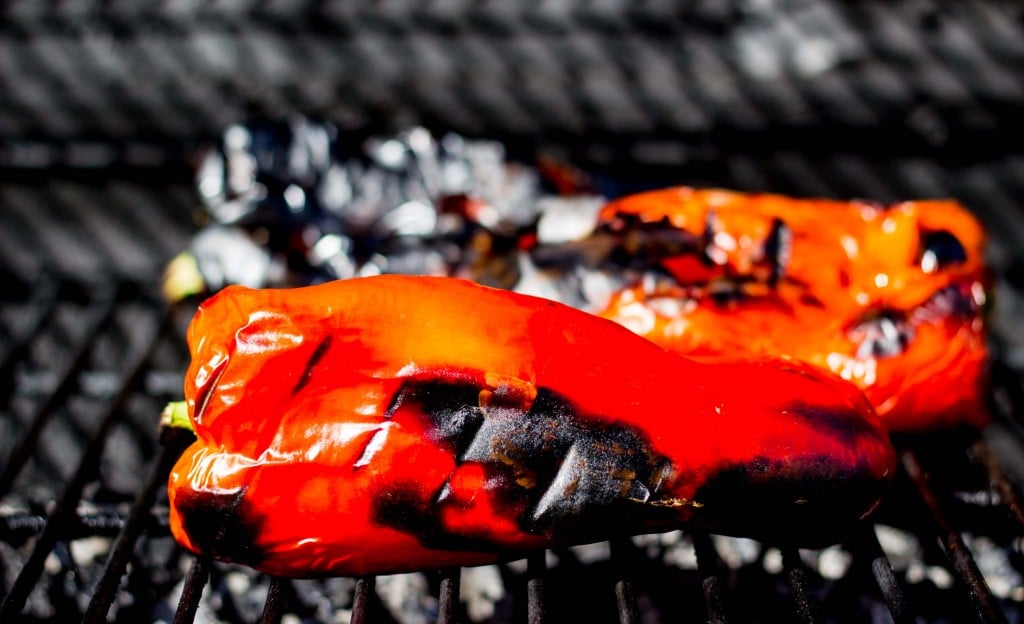 I grilled my red peppers instead of roasting them in the oven, but the oven would work just as well.  Then, I put them in  large bowl and covered them with plastic wrap for a few minutes.  This made it much easier to peel all the skins off of them. 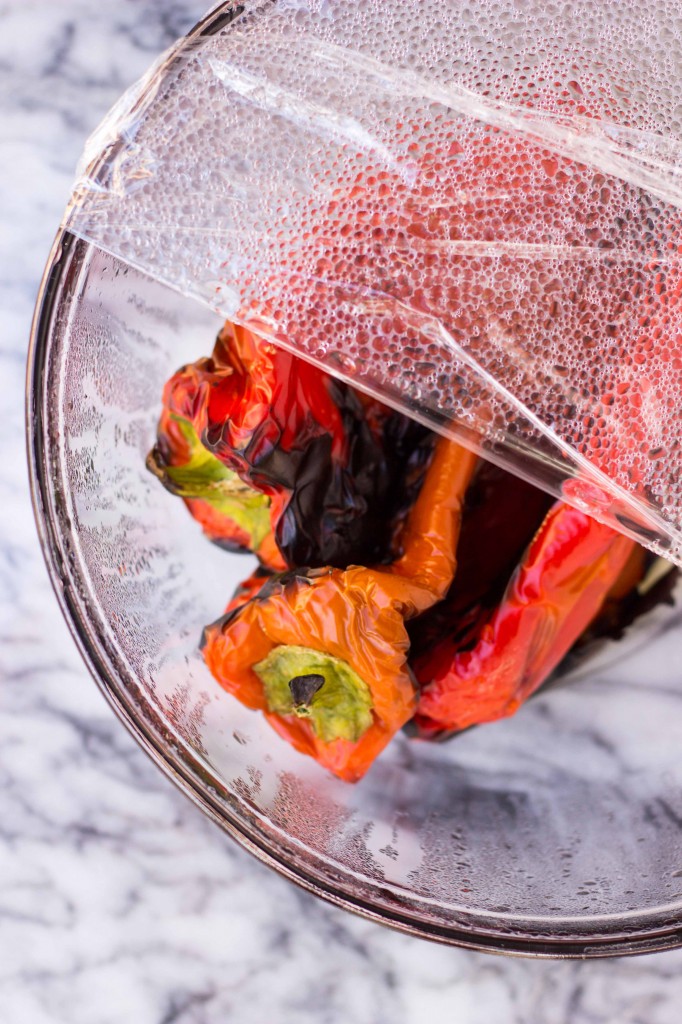 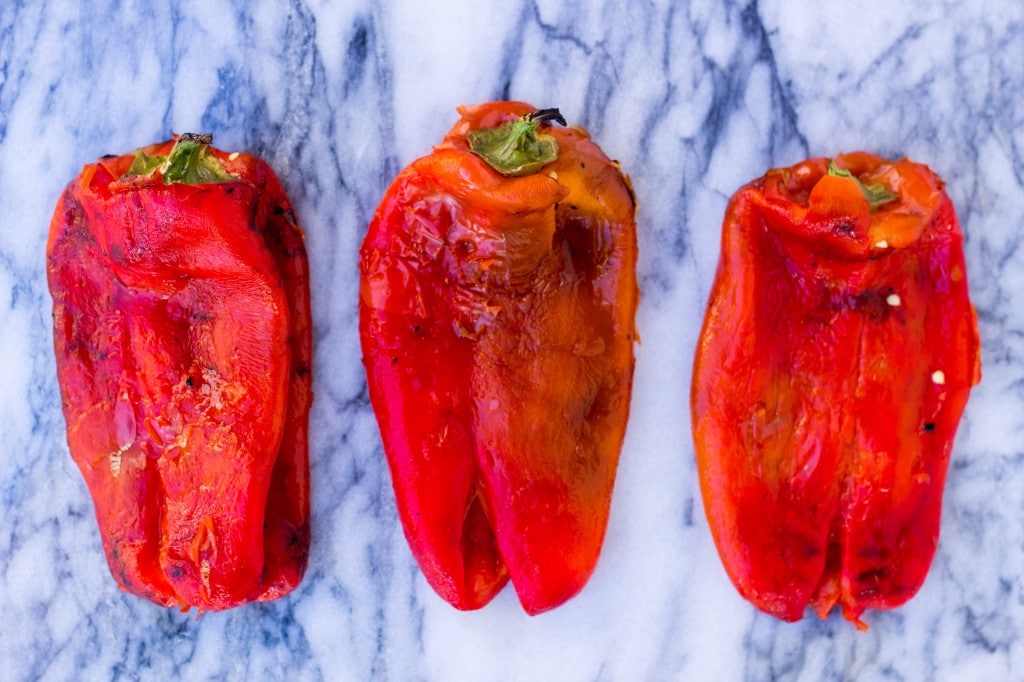 Compared to other peppers, red peppers are pretty sweet, but I had seen sugar added to a lot of the other enchilada sauces I looked up, so I felt like if I left out the sugar, the sweetness from the red pepper would make up for it, and sure enough, I didn’t need to add any extra sugar to the sauce.  I pureed the roasted red peppers in a blender and then heated them with a bunch of other tasty spices.  If you are not a red pepper fan, I’m sure that you could use crushed or stewed tomatoes in place of the red pepper. 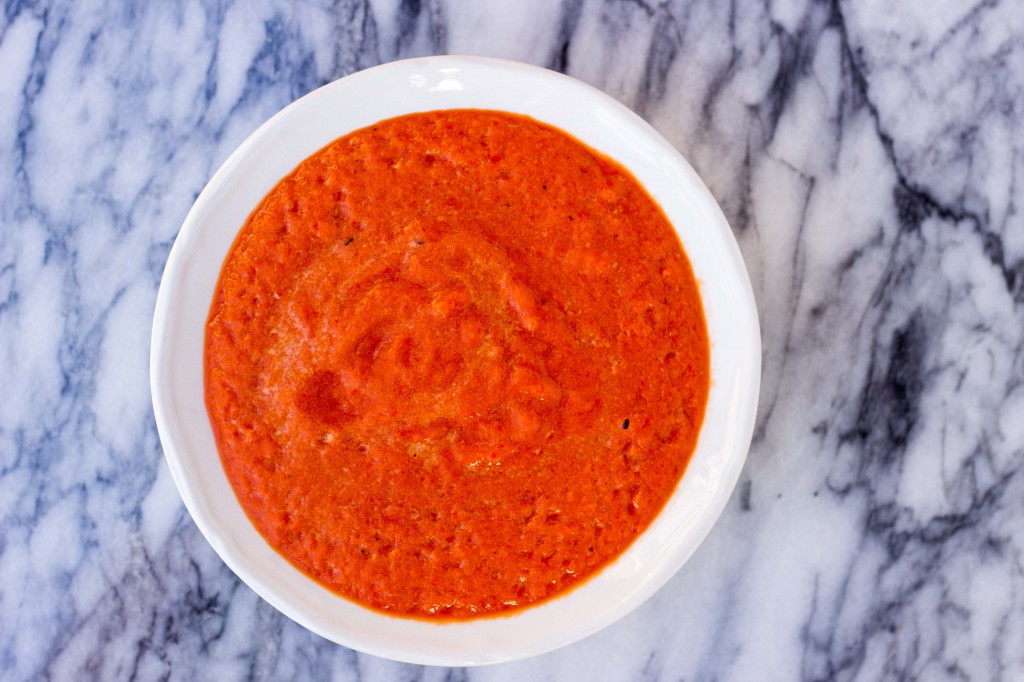 I used the first three red peppers to make the test batch of sauce with, the second three to perfect the sauce, and now I have three ginormous red peppers left, so don’t be surprised if you see another red pepper recipe soon 🙂

What recipes have you been intimidated to tackle, but then you found to be really easy?

Makes about 2 cups of sauce, just enough for a large pan of enchiladas.
*I have not done it myself, but if you prefer, you can use an equal amount of canned tomatoes instead of red peppers for a tomato based enchilada sauce.
**If using gluten free flour, the sauce may seem a little grainy once you finish cooking it, but that texture should disappear once you cook it in the oven with the enchiladas. 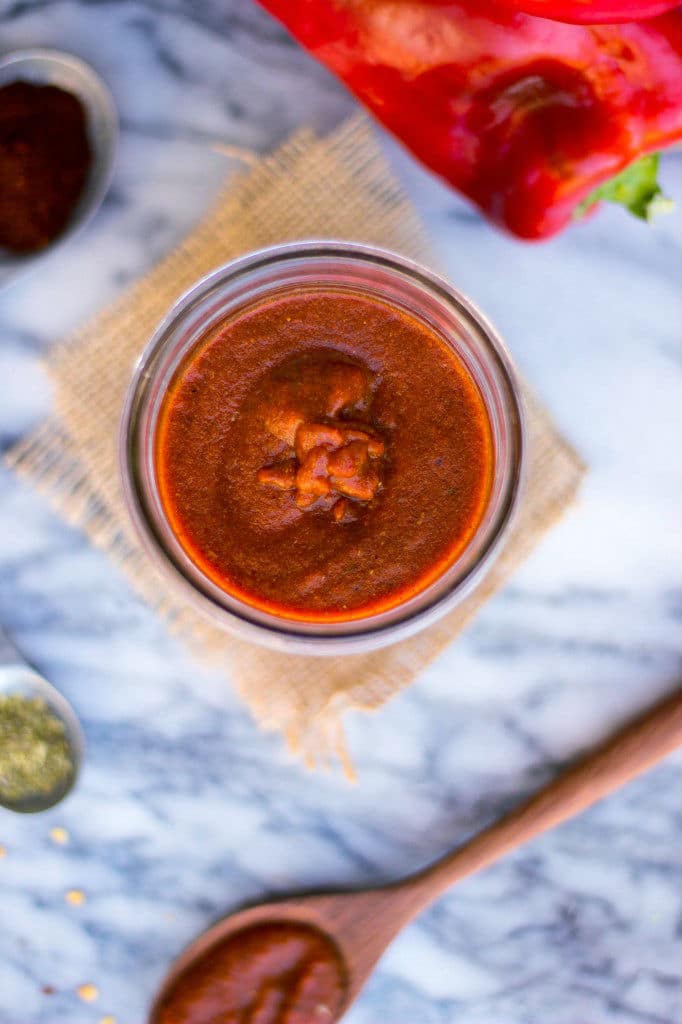 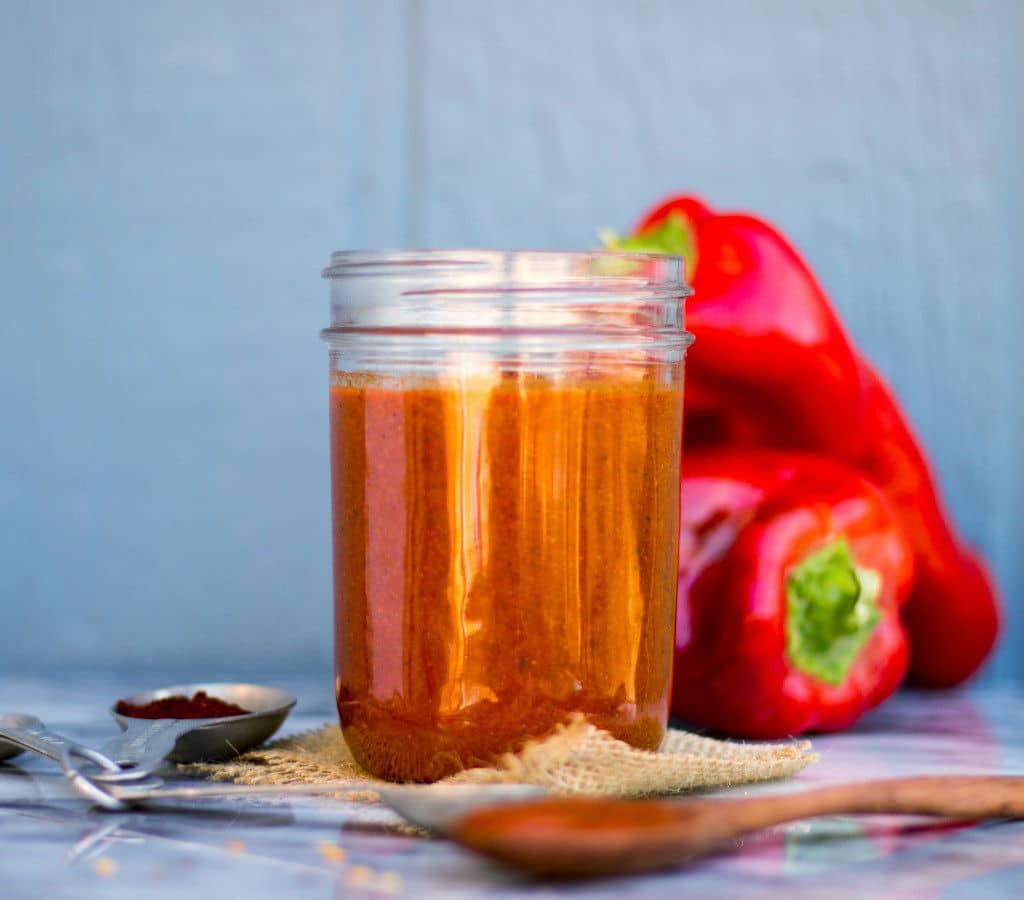 One day Eric put his tool bag down on this couch and Cheeto really loved sitting behind it, I think he felt hidden and safe.  Three months later, we still haven’t moved it.  I just read this article called, “6 signs your cat owns you” and if you couldn’t already tell, Cheeto definitely owns me! 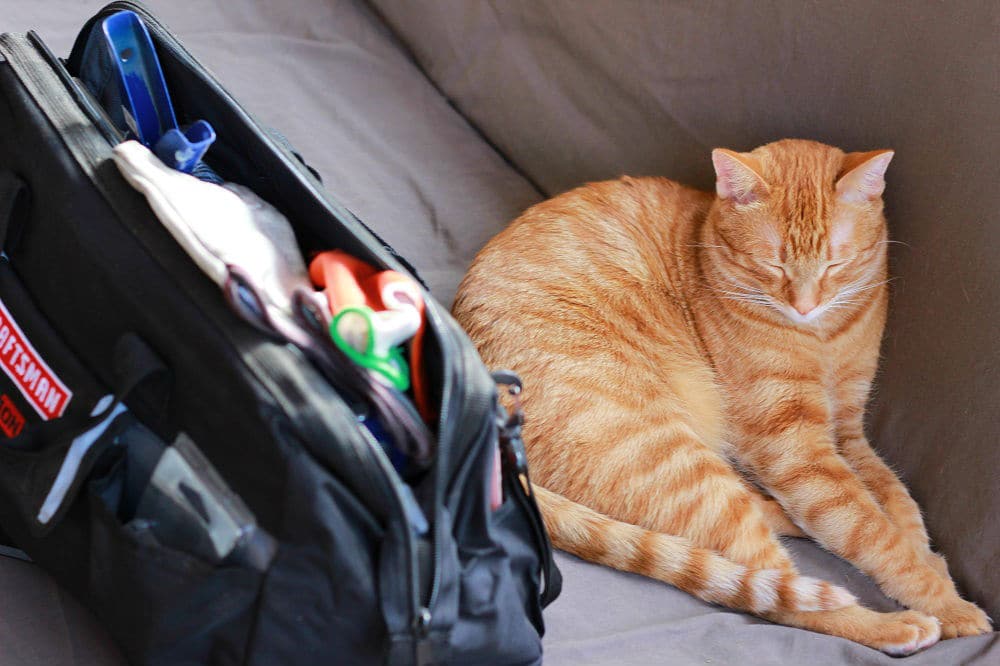